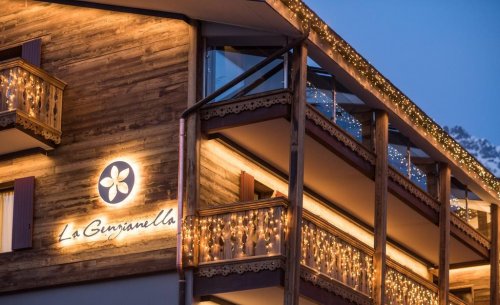 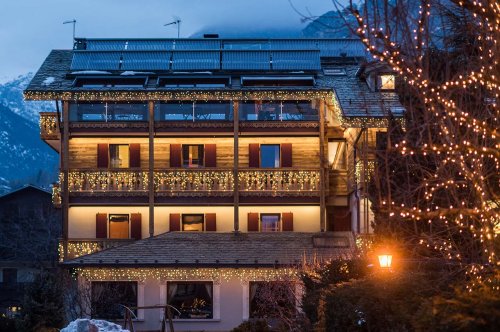 ‘La Genzianella’ Hotel is a 3 star hotel in Bormio, conveniently located in front of the ski lifts and 5 minutes walk from the historical center of the town.

The bedrooms are furnished with pinewood furniture and wooden flooring.

The restaurant of Genzianella, furnished with a typical Alpine style, is the perfect setting for romantic dinners or for special occasions.

Vegetarian or gluten-free dishes may be prepared on request.

The staff is happy to set up the traditional ‘Stube Bormina’ (dining room) for special or private events .

The hotel has a small meeting hall entirely paneled with wood and which may host about 15 people.

The Alta Valtellina is crossed by the SS 38 Stelvio, which climbs up the Adda valley from Colico until reaching the Pass after which it is named, from where you can then descend to Valvenosta. From Bormio SS301 Foscagno leads toward Livigno and SS300 Gavia leads toward Santa Caterina Valfurva and Valcamonica (summer connection).

From Milan (200 km): Highway until reaching Colico toward Lecco, and then take the SS38 toward Sondrio – Bormio.

From Bolzano (Brennero motorway): Proceed through the Stelvio pass.

From Triveneto area proceed through the Tonale pass and the Gavia pass.

From Engadina go through the Forcola pass and the Bernina pass.

Passo del Gallo Tunnel (closed during the night) for those coming from Engadina, Alto Adige or Austria.

From central and southern Italy: Bologna – Milano motorway; follow the instructions ‘from Milan’.

Modena Brennero motorway, take the Brescia Ovest exit, continue along the SS 510 toward Boario Terme then take the SS42 toward Edolo, then the SS39 toward Aprica – Tirano – Bormio.

From North: Go through Tirano – Passo Bernina (open all year round) and alternatively from

Buses are available connecting with trains coming from Milan.

Stelvio Pass, 2757 meters (from the province of Bolzano) open from end of May to end of October.

Gavia Pass, 2621 meters (from the province of Brescia) leading to Santa Caterina Valfurva and then to Bormio, open from beginning of June to end of October.

Mortirolo Pass, 1852 meters (from the province of Brescia), leading to Mazzo, Grosio, Bormio, open from May to September.

Aprica Pass, 1176 meters (from the province of Brescia), open all year round.

San Marco Pass, 1992 meters (from the province of Brescia), leading to Morbegno, Sondrio, Tirano, Bormio, open from May to November.

Santa Maria Pass, 2502 meters (from Switzerland), which connects to the road that runs between Stelvio to Bormio, open from May to November.

Forcola Pass, 2315 meters (from Switzerland) from where you can reach Livigno, open from May to November.