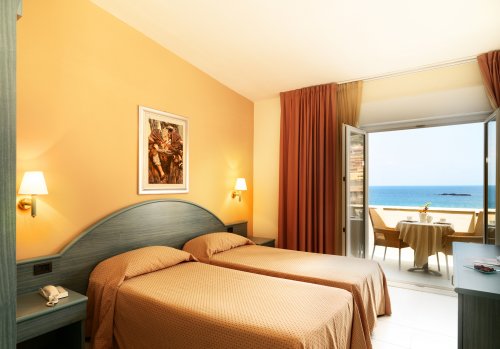 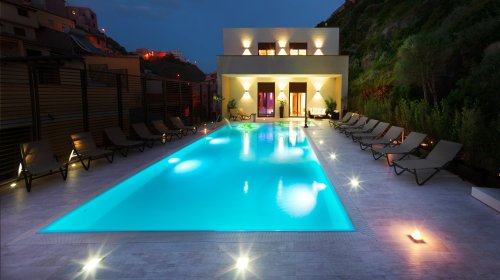 Fabulous views and only a short walk from the town centre [although up hill]. Very friendly staff and the rooms with a balcony are a...

The Hotel Riviera was the first hotel built in the antique medieval village of Castelsardo, and based on an established professionalism, offers its clients a modern and comfortable structure.

Open year-round, the hotel is easily accessible, features ample soundproofed rooms and dominates the beachfront of the “marina” located below with which it is connected by means of an underground direct passageway from the private car park.

The ideal destination for those who would like to enjoy a holiday in complete tranquillity and a guarantee of a stay that is rich with enjoyment and cultural excursions of notable interest.

Upon request (based on availability) and with a small surcharge, it is possible to have a room with a balcony overlooking the sea.

In the twin or double rooms, with a small surcharge, it is possible to add a supplemental bed.

Those who appreciate fine cuisine cannot deprive themselves of the first-class tastes offered by the “Ristorante Fofò," the true feather in the cap of the Castellanese restaurants.

Founded on the dawn of the tourism traditions of Castelsardo, it is famous for the Castellanese lobster and the seafood specialties linked to the ancient recipes of the local fishermen as well as the famous and renowned dishes of modern and international cuisine.

The service is always impeccable as guaranteed by the performance suitable to a refined and comfortable environment.

Castelsardo is reachable from Sassari by taking the SS200, from the inlands of Anglona by the SS134, and from Santa Teresa di Gallura by a beautiful panoramic coastal street.

- The Torres Port with boats arriving from Civitavecchia, Genoa, and Tolone.

- Olbia with boats arriving from Civitavecchia, Genoa, and Livorno.