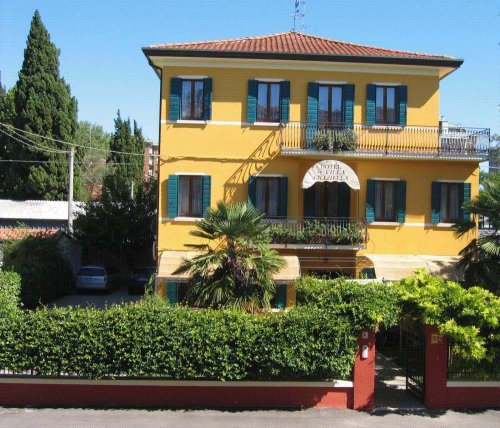 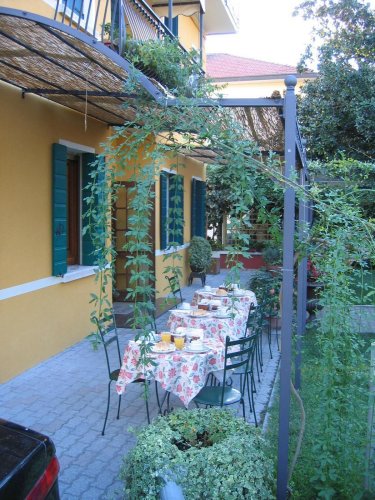 Inn keepers at this hotel were thoughtful and helpful. Bent over backwards to answer our questions, make us feel welcome, and help us...

We had a wonderful stay at the hotel, not in small part due to the kindness and helpfulness of the staff. On arrival, we found that one...

A refrigerator in the room would be useful.

Antica Villa Graziella is a welcoming, family-run hotel located in Marghera, mainland Venice, in a peaceful and quiet area.

Services in the immediate vicinity of the hotel include shopping centres, restaurants, pizzerias, pharmacies and banks.

Guests are advised that the hotel is not served by a lift.

The hotel provides guests with comfortable, luminous rooms that ensure our guests enjoy a pleasant vacation or weekend getaway.

Each room is equipped with air conditioning, a colour television, a direct dial telephone, free WiFi internet access, central heating and an en suite bathroom with a hairdryer and a set of complimentary toiletries.

A lush garden is open during the summer, and provides an ideal place for guests to relax and unwind while enjoying a refreshing drink in good company.

A delicious buffet breakfast is served each morning from 7:45 to 10:30 in the breakfast room; during the summer, breakfast is also served in the garden.

Villa Graziella also has books available for guests to borrow in the library.

Take the A4 Milano – Venezia motorway to the Marghera exit. Follow the directions for Venezia - Chioggia - Ravenna; at the first traffic circle, turn right and head towards Marghera Centro; at the second traffic circle (Piazzale Parmesan), turn onto Via Calvi and then turn left onto Via Coletti.

From Belluno, Udine and Trieste:

From the A27 Belluno – Venezia motorway and the A4 Trieste – Venezia motorway, turn onto the bypass heading towards Padova - Milano and take the last exit towards Marghera - Chioggia - Ravenna. Upon reaching the large traffic circle, take the exit on the right heading towards Marghera Centro. At the second traffic circle (Piazzale Parmesan), head down Via Calvi and turn left onto Via Coletti.

From Ravenna and Chioggia:

From the Romea State Road, follow the directions for the A4 Milano – Venezia motorway. Go past the shopping centres on the right, and at the large traffic circle, take the first exit on the right heading towards Marghera Centro. At the second traffic circle (piazzale Parmesan), take the third road (via Calvi) and turn left onto via Coletti.

The hotel is located around 900m away from the Venezia Mestre train station. Outside the station, go through the underpass taking the Marghera exit and go along Via Ulloa. Upon reaching Piazzale Giovannacci, turn right onto Viale Paolucci and then right again onto Via Coletti.

Alternatively, you can take the tramway. To do that take the exit "Mestre" in the train station of Mestre, turn right and go along until you reach Piazzale Favretti, where the tramway stop is located. The last tramway to Marghera goes at 21:33. Upon reaching Marghera go off at the Via Lavelli stop and head to Viale Paolucci. Turn left, go along 300m until you see the supermarket "Ali" on the right-hand side and a petrol station Q8 ahead of you. The hotel is located in the first street on the right, after 30m.

From Venice Marco Polo Airport, take the ACTV number 15 bus to the Piazzale Favretti, from where you take the tramway to Marghera as described above (by train).

From the Treviso – Sant'Angelo airport, a bus is available directly to the Mestre train station, from where you reach the hotel as indicated in the description "By train" above.