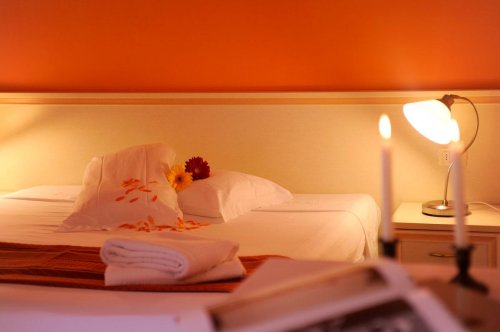 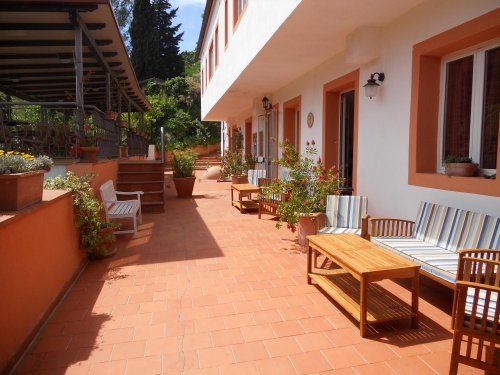 Hotel Etrusco is situated in Rio Marina, nestled in a peaceful hillside in the north eastern part of the Island of Elba surrounded by green plants, citrus trees and Bougainvillea.

Recently refurbished, the hotel is located in the main building with the guest rooms on the first floor and a small bar and restaurant on the ground floor. The hotel is surrounded by ample outdoor spaces filled with brightly coloured flowers. There is a sun terrace complete with sunbeds where guests can lie back and relax and feel at one with nature.

The list of services is completed by a communal reading lounge, a colour satellite television, a restaurant, 24 hour reception service with a safe and a fax machine and a private car park.

The hotel has a bar and a large communal terrace where guests can enjoy relaxing moments with friends, sit and read or sip on a refreshing aperitif.

The outdoor spaces are large and quiet - perfect for those looking to organise yoga or language courses.

The restaurant is open every evening for clients, offering the chance to sample traditional cuisine including unique local fish-based recipes.

The hotel has a large trellis garden with a stunning view over the Montefico valley where in the evenings guests can enjoy romantic candlelit dinners.

Take the A12 Genova Livorno motorway and exit at Rosignano, follow the Aurelia state road until you reach Venturina-Isola d'Elba.

Follow sings for Piombino Marittima until you reach Piombino port.

Take the A22 Brennero motorway until you reach Modena and then take the A1 Milano-Napoli motorway to Florence - Signa.

Follow signs for Piombino Marittima until you reach Piombino port.

Follow signs for Piombino Marittima until you reach Piombino port.

Piombino port train station is on the Campiglia-Piombino Marittima line which is reachable by catching a connection from the Rome - Genoa line.

Piombino Marittima station is opposite the departure point for the ferries.

The Island of Elba is reachable by boat from Piombino port, there are 2 companies: TOREMAR and MOBYLINES, who offer convenient services throughout the Summer season with a number of daily services. Once you arrive in Rio Marina, exit the port and turn left in to the centre of Rio Marina and then follow signs for the provincial road that passes through the centre, exit the town and continue straight on.

After approximately 1.5km, after passing a shopping centre, continue for a further 200 metres where you will find Hotel Etrusco and its car park on the left.

When you arrive in Portoferraio, exit the port area and follow the "tutte le direzioni" signs, take the 4 lane highway that leads out of Portoferraio. Turn left towards Porto Azzurro/Rio Marina and then continue along the provincial road (tree-lined road) towards Loc. San Giovanni.

Once you pass "salita de Le Grotte", follow the scenic winding road, at the end of which there are 2 different ways to reach the hotel:

Just before you reach the end of the winding road, be careful on the left at the fork for Magazzini. Turn left following signs for "Magazzini" and after approximately 3.5km after a large bend, turn right for Volterraio. Then take the steep, narrow road named "strada del monte del Volterraio" (the road for Mount Volterraio). Follow the road to the top, then descend until you reach a roundabout, from here, follow signs to "Rio Marina", after approximately 400 metres, you will find Hotel Etrusco and its car park on the left.

- 2. FROM PORTO AZZURRO TO RIO ELBA

Airport
Ferry Terminal
Bars, restaurants and others »
All distances shown here are in a straight line, unless indicated otherwise - the distance by land transport may increase depending on the available routes. Please refer to the map for further information on the location of the hotels.