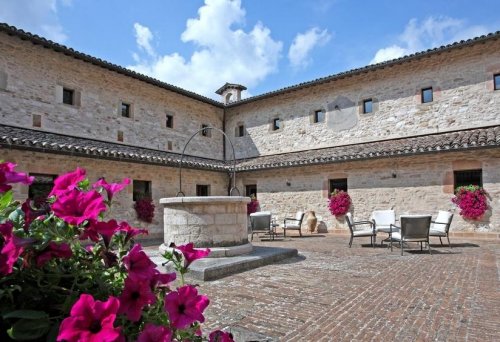 Park Hotel ai Cappuccini is situated in luscious, green parkland in Gubbio in the heart of Umbria.

The hotel is located in a carefully restored 17th century monastery, a short walk from the splendid medieval town centre of Gubbio.

The hotel is the perfect choice for a pleasant, relaxing holiday as well as offering the chance to experience holistic well-being with access to a spa containing Finnish saunas, relaxation areas with a selection of herbal teas, a Turkish bath, a Mediterranean bath, multi-sensory showers, wasser paradise, private spa, rasul chamber, massage chambers and beauty treatments, a hydromassage jacuzzi, vertical and horizontal sunbeds, a barber and a hairdresser.

Also available for guest use is a large, well equipped gym, a 24 metre heated indoor swimming pool with a panoramic sun terrace, tennis court or five a side football pitch, mountain bikes and a pool room.

Also available on request are lessons in psycho-motor control and stress management.

When booking, it is imperative that guests check the exact capacity for the room chosen (see room description). In the event that a booking is made for a different capacity than that required, the price difference must be paid on site.

Most of the rooms are situated in the newly built block, they are comfortable and spacious, decorated in a contemporary style and have bathrooms finished in wood and marble. The remaining rooms are situated above the cloisters of the old convent (appropriately named “the cloister rooms”) and are decorated with Franciscan style furniture with marble, wood and ceramic bathrooms. Some of the cloister rooms have a balcony.

The Superior rooms are decorated in both contemporary and period styles and have been finished with slightly more attention to detail - for example the addition of a leather headboard or a four poster bed - as well as a living room.

All rooms feature a satellite colour television, Sky TV, air conditioning, a minibar, a safe, Wi-Fi Internet connection and an en suite bathroom with a hairdryer.

The triple room is only for families of 2 adults and one child under the age of 16.

From the East coast

Follow the A14 Bologna – Taranto Motorway and take the exit for Fano (suggested route) and continue towards Rome or exit at Cesena Nord and follow the E45 expressway until you reach the exit for Gubbio and then follow the state road for approximately 25km.

From the West coast (recommended route only for guests arriving from Tuscany and Liguria),

After leaving the A1 Milano – Napoli Motorway at the Valdichiana exit, continue towards Perugia along the motorway approach road and then take the E45 expressway. Once you reach the city, follow the expressway towards Cesena and exit at Bosco (28km) or at Umbertide-Gubbio (25km away – recommended route).

From the East coast

Follow the A14 Bologna – Taranto motorway and take the Ancona-Nord exit heading towards Fabriano. Once you have passed Fabriano (40km) follow the state road for Gubbio.

From the West coast

Follow the A1 Milano – Napoli motorway and exit at Orte then follow signs for Perugia – Cesena (E45 expressway). Once you reach Perugia follow directions for Cesena and exit at Bosco (28km) or at Umbertide-Gubbio (25km - recommended route).

On arrival in the city

a) From the E45 (from the north take the Gubbio exit – from the South: take the Umbertide-Gubbio exit) or from the A14 (Fano exit): at the roundabout approaching Gubbio, follow signs for Gubbio Ovest for approximately 1km, follow the road until you reach a small roundabout, the hotel is located on the left.

b) Approaching from the E45 (from the South: take the Bosco-Gubbio exit), once you reach the city, at the roundabout turn left and continue straight on for approximately 0.8km, at the next roundabout, turn right and then follow directions for the hotel.

c) Arriving from the A14 (take the Ancona-Nord exit), once you approach Gubbio, follow the ring road and take the Scheggia – Impianti Sportivi exit (the exit following Gubbio centro). Continue straight across the first and second roundabouts and then follow directions to the hotel.

The nearest train station is Fossato di Vico – Gubbio (18km from Gubbio) on the Rome – Ancona line, from the station you can catch a bus to the city centre;

Alternatively a taxi service is available.

The nearest airport is Perugia which is 40km away.

For all other destinations, the recommended airports are: