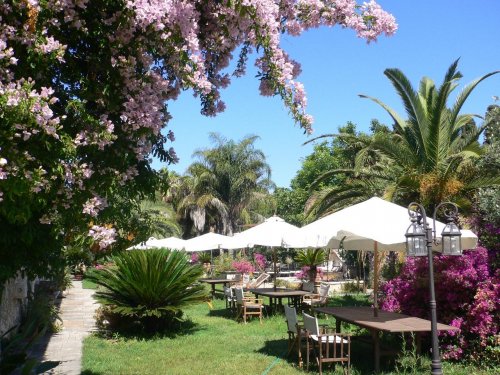 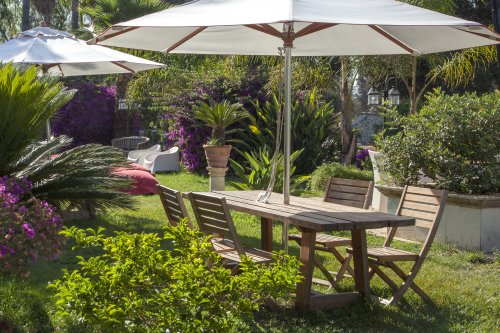 The stay was absolute TOP and we would very much like to come back.

The Agriturismo Villa dei Papiri is located 6km from Syracuse and is surrounded by nature.

Guests can go for pleasant, relaxing walks in the area around the hotel, take guided nature trips to explore the archaeological remains from the Greek era, and see the beautiful local flora and fauna.

Guests have access to a comfortable and welcoming room with sofas ideal for reading a book, listening to music, watching television or using free internet access. Free parking is available next to the guest rooms.

The staff of Villa dei Papiri are pleased to suggest trips and activities for guests, providing suggestions to relax and take in the beauty of the surroundings.

The hotel has eight different suites in the main building with a fully equipped kitchen:

- one-room apartments measuring 40 to 65 square metres (three doubles, three triples, three quadruples and two quintuples) with a raised level for the sleeping area (wrought iron canopy double bed and single beds that can be used as a sofa), a fully equipped kitchen, and an en suite bathroom with a shower and hairdryer on the ground floor. Each suite includes air conditioning, a refrigerator and a colour television.

All of the one-room apartments have a private entrance and overlook the shared garden where each room has a table with an umbrella where guests can relax outdoors.

The guest rooms include a refrigerator, air conditioning, an LCD television, and an en suite bathroom with a shower and a hairdryer.

Every room is provided with daily cleaning service and linen changes in the bedroom and bathroom every three nights.

A delicious breakfast is served each morning in the breakfast room including an extensive buffet with cappuccinos, coffee and tea, yoghurt, fruit, pastries and fresh baked goods as well as meats and cheeses.

Guests can also take advantage of the half-board meal plan available at the nearby Villa Cristina, managed by the same family. Guests can enjoy exquisite specialities of Sicilian gastronomy prepared using fresh meat and fish.

From the A18 Catania – Siracusa motorway, take the Siracusa Sud exit. At the traffic light, turn right towards Canicattini and from here, go to the traffic circle and turn right again.

After 100m, turn left at the fork heading towards Fonte Ciane and take the street on the right heading towards Cozzo Pantano, Fonte Ciane. Follow the directions for Villa dei Papiri and the resort is located after around 2km (the entrance is on the left in front of the Ciane River).

The local railway station is the Syracuse station.