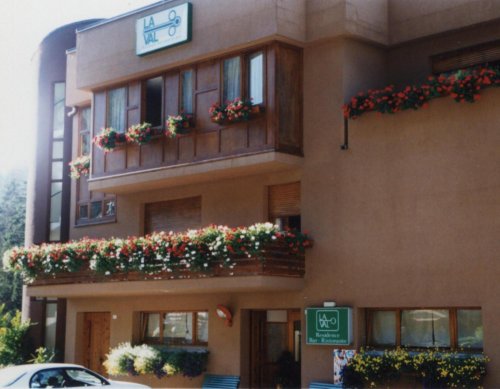 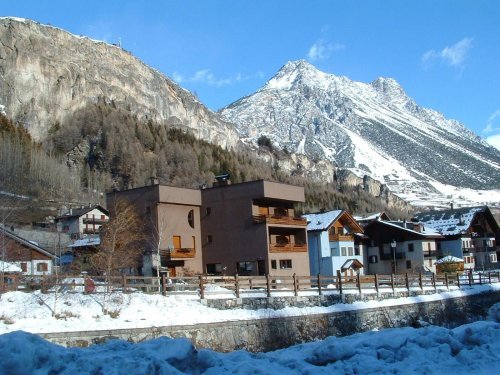 Hotel Residence La Val is an elegant family run hotel in the Isolaccia district, in the comune of Valdidentro, surrounded by the peaceful, green countryside of the Valtellina.

The hotel is made up of a central area with a restaurant, a bar and a new veranda, and a second building which houses the guest rooms.

Outside is a children's play area to keep children occupied and provide some peace and quiet for parents.

Sports lovers can use the nearby cycle paths and sports centre which has tennis courts, football pitches and bowling greens.

The list of services on offer is completed by an ample external car park and a garage where guests can park their cars.

Hotel Residence La Val is the perfect choice for family holidays but its wide choice of accommodation is capable of satisfying any requirements guests might have.

Hotel Residence La Val offers a variety of room types, perfect for family trips as well as for groups of friends on holiday.

The rooms feature a colour television, a telephone and an en suite bathroom with a hairdryer.

The studios feature a well equipped kitchenette with a fridge.

Every morning a delicious breakfast is served to guarantee guests start their day in the best possible way.

At lunch and dinner the menu includes a wide choice of dishes, a vegetable buffet and a prestigious selection of regional and national wines.

Particular attention is paid to kids with special personalised menus available on request.

Guests can reach the Alta Valtellina by way of the SS38 "Stelvio Pass" which runs from Colico in the Adda Valley, to Stelvio and then down in to Valvenosta. From Bormio take the SS301 Foscagno state road which heads towards Livigno and the hamlet of Isolaccia (Valdidentro).

From Milan (200 km): take the highway to Colico heading towards Lecco, then take the SS38 state road towards Sondrio - Bormio.

From Triveneto continue along the Tonale pass and then the Gavia pass.

From Engadina take the Forcola pass and then the Bernina pass.

From Bormio take the SS301 Foscagno state road which goes to Livigno and the hamlet of Isolaccia (Valdidentro).

Take the Gallo pass tunnel (closed during the night) for those coming from Engadina, Alto Adige or Austria.

From central and southern Italy: Take the A1 Bologna - Milano motorway and follow the directions above "From Milan".

From the Modena - Brennero motorway, take the exit for Brescia Ovest; continue along the SS510 state road towards Boario Terme and then take the SS42 towards Edolo, and then the SS39 towards Aprica - Tirano - Bormio.

From the north: Pass through Tirano - Passo Bernina (open all year round), and instead of passing through Livigno - Zernez - Drossa tunnel (open all year from 8.00 - 20.00).

From Bormio take the SS301 Foscagno state road which goes to Livigno and then follow signs for Isolaccia (Valdidentro).

Take the Stelvio pass - 2757 metres (from the province of Bolzano), open from the end of May to the end of October.

The Gavia pass - 2621 metres (from the province of Brescia) to Santa Caterina Valfurva and then to Bormio - open from the beginning of June to the end of October.

The Mortirolo pass - 1852 metres (from the province of Brescia), to Mazzo, Grosio, Bormio, open from May to September.

The Aprica pass - 1176 metres (from the province of Brescia), is open throughout the year.

The San Marco pass - 1992 metres (from the province of Bergamo), to Morbegno, Sondrio, Tirano, Bormio, open from May to November.

The Santa Maria pass - 2502 metres (from Switzerland), which joins the road from the Stelvio pass, and descends towards Bormio, open from May to November.

The Forcola pass - 2315 metres (from Switzerland) to Livigno, open from May to November.

From Bormio take the SS301 Foscagno state road to Livigno and follow signs for Isolaccia (Valdidentro).