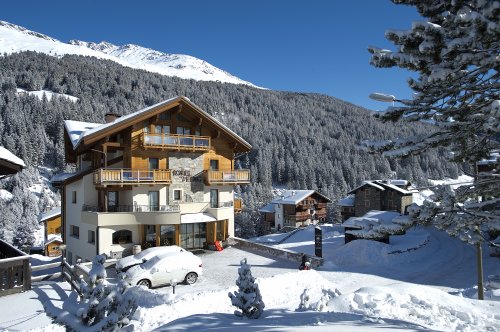 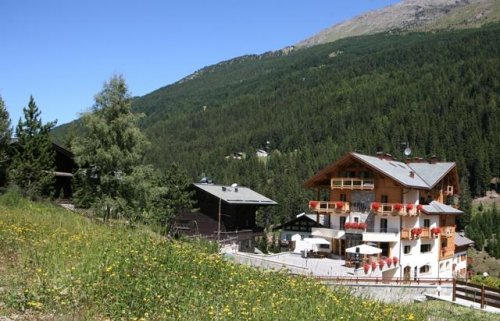 Santa Caterina Valfura's Vedig Hotel is situated in the heart of the Stelvio National Park, a short walk from the Nordic ski slopes, 15 minutes from Bormio and its famous thermal spas and conveniently located near Sondrio and Livigno.

The nearest train station is Tirano.

The warm atmosphere in the fireside room is the perfect spot to relax with a hot drink or a good book.

Guests can sample local cuisine at the hotel's restaurant or dedicate time to their well-being at the spa with its sauna and Turkish bath.

Note that during the Summer, the Vedig Hotel only accepts bookings for 1 week stays: from Saturday to Saturday and Sunday to Sunday.

The rooms have been decorated in a welcoming alpine style and benefit from a beautiful view over the Alps.

Every morning from 07:30 to 10:00, a delicious buffet breakfast is served with lots to choose from including: hot bread, fragrant croissants, cakes, cereal, yoghurt, milk and fresh fruit.

It's also possible to organise tastings and traditional dinners.

The fireside bar provides a unique atmosphere where guests can sample a wide variety of delicious snacks.

The elegant interior design makes the bar a lovely place to spend the evening as well as a pleasant place to sit back and relax.

The SS38 Stelvio Pass cuts through the “Alta Valtellina” to the Adda valley, from Colico to the pass from which it takes its name, from here the pass descends in to Valvenosta. From Bormio you can take the SS301 Foscagno state road towards Livigno and the SS300 Gavia state road towards Santa Caterina Valfurva and the Valcamonica (summer route).

From Milan (200km): take the highway to Colico towards Lecco and then the SS38 state road towards Sondrio – Bormio – Santa Caterina Valfurva.

From Bolzano (Brennero motorway): proceed along the Stelvio Pass.

From Triveneto take the Tonale pass and the Gavia Pass.

From Engadina take the Forcola Pass and the Bernina Pass.

Take the Gallo Pass (closed during the night) for those arriving from Engadina, Alto Adige or Austria.

From central and southern Italy: Take the Milan – Bologna motorway and follow the directions listed under "From Milan". From the Modena – Brennero motorway take the exit for Brescia Ovest; continue on the SS510 state road towards Boario Terme and then on the SS42 towards Edolo and then take the SS39 towards Aprica – Tirano – Bormio – Santa Caterina Valfurva.

From the North: travel towards Tirano – Passo Bernina (open throughout the year) or alternatively from Livigno – Zernez – Tunnel della Drossa (open all year from 8:00 to 20:00).

The nearest train station is Tirano, terminal of the Ferrovie Italiane train line as well as the Ferrovie Retiche line.

There are bus departures that coincide with the arrival of trains from Milan.

Passo Stelvio 2757 metres (from Bolzano) open from the end of May to the end of October.

Gavia Pass 2621 metres (from Brescia) which leads to Santa Caterina Valfurva, open from the beginning of June to the end of October.

Mortirolo Pass 1852 metres (from Brescia), which leads to Mazzo, Grosio, Bormio and is open from May to September.

San Marco Pass: 1992 metres (from Bergamo) which leads to Morbegno, Sondrio, Tirano and Bormio and is open from May to November.

Santa Maria Pass: 2502 metres (from Switzerland) which connects the road that descends from the Stelvio Pass to Bormio, is open from May to November.

Forcola Pass 2315 metres (from Switzerland) which leads to Livigno, open from May to November.