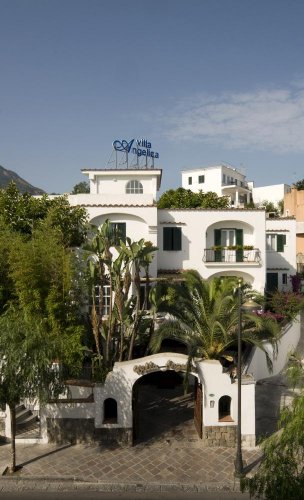 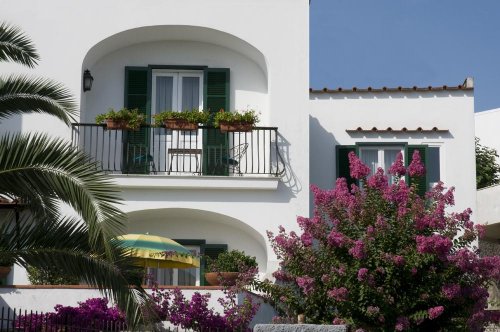 The Albergo Villa Angelica is found just a short distance away from the centre of Lacco Ameno in Ischia, and is characterised by beautiful Mediterranean architecture. Surrounded by the lush greenery of a garden with a partially covered thermal swimming pool, it is in a peaceful and convenient location close to the sea with beautiful beaches, the Bay of San Montano and the tourist attractions.

An ideal base for those wishing to explore the cultural and natural sites of Ischia island, the hotel has a wellness centre where guests can relax and unwind while enjoying aesthetic treatments and massages.

The hotel has 20 spacious and luminous rooms elegantly decorated and equipped with a colour television, climate control and a ceiling fan, a direct dial telephone, a minibar, and an en suite bathroom with a hairdryer.

The owners run the kitchen personally, offering delicious specialities of Ischia tradition along with international dishes.

The elegant bar provides an ideal place to relax and unwind in good company, located in the cosy hall with large windows overlooking the garden, where WiFi internet access is also available.

To reach the port of Pozzuoli

From the Naples motorway tollbooth, continue for 25km until reaching the bypass exit. Follow the directions for Pozzuoli until reaching exit 12 Via Campana, then head towards Porto - Imbarco per le Isole.

To reach the Beverello pier

From the Naples motorway tollbooth, continue for 25km until reaching the Napoli Via Marina junction. Continue following the directions for Porto - Imbarco per le Isole.

The Island of Ischia can be reached from the following ports:

- the port of Pozzuoli, with Pozzuoli or Caremar ferryboats;

- Beverello pier, with ferryboats and hydrofoil boats run by Lauro, Snav and Caremar;

- the port of Mergellina, with hydrofoil boats.

The ports of Naples can be reached from:

- Mergellina Station located 200m away from the port of Mergellina.

- Campi Flegrei Station, connected to the port of Mergellina by taxis, buses, trams or the underground.

- Naples Central Station located in Piazza Garibaldi, connected to the port of Naples Beverello by taxis, buses and trams.

From Naples Capodichino International Airport, a shuttle service is available to Beverello pier, and taxis are available to other locations.

Airport
Ferry Terminal
Bars, restaurants and others »
All distances shown here are in a straight line, unless indicated otherwise - the distance by land transport may increase depending on the available routes. Please refer to the map for further information on the location of the hotels.