1. Bedrooms: Nice size and very clean. Room to put stuff was adequate in both rooms. Rooms have a safe.

3. Elevator to the upstairs floors came in handy for getting luggage to the rooms.

4. Carlos was very personable and the waiter (don't know his name) was also helpful. In general, the staff was nice/polite.

Check-in and check-out was fairly efficient.

5. Parking: As this was off-season, the parking was adequate and parking spaces were plenty (and free). Easy to unload the car.

6. Location: Easy to drive to Lucca or Pisa from the hotel.

7. Restaurant: Food was very good but not outstanding (we only ate there one night, the second night it was closed.)

1. The towels were kind of a thin fabric the first night (kind of like a kitchen towel material) but the "normal", fluffy kind on the second night.

2. The breakfast was continental style and merely adequate.

1. The restaurant's chairs! These are the most uncomfortable chairs I have ever sat in. Dinner service was good in the beginning when we were the only guests but became a lot slower once a few tables were occupied. It took a long time for the dessert to come out (we almost canceled our order).

2. We didn't try the TV in the single occupied room (look like a flat panel TV) but the TV in the double room (a very old looking thing, very tiny) did not work or at least we could not figure out how to make it work. (OK, we were not really there to watch TV but it is nice to catch up on the news.)

3. The room to the back is over the kitchen which has been mentioned several times. We could hear kitchen noises and yes, bottles, in the evening when the restaurant is still open. Not really super annoying to us (more amusing) but some people might not like this "feature".

Rooms/bathrooms (booked 2) were clean and of good size. One had a balcony (not a great view), one had nice view (no balcony).

Hotel has elevator to upper floors.

Easy to get to Lucca and Pisa.

Breakfast is adequate but not great.

Restaurant is very good but the chairs are the most uncomfortable chairs I have ever sat on in my life. 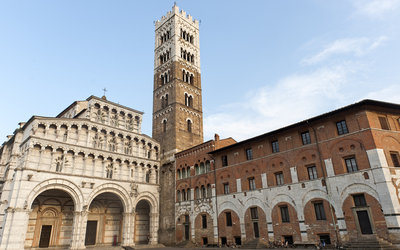